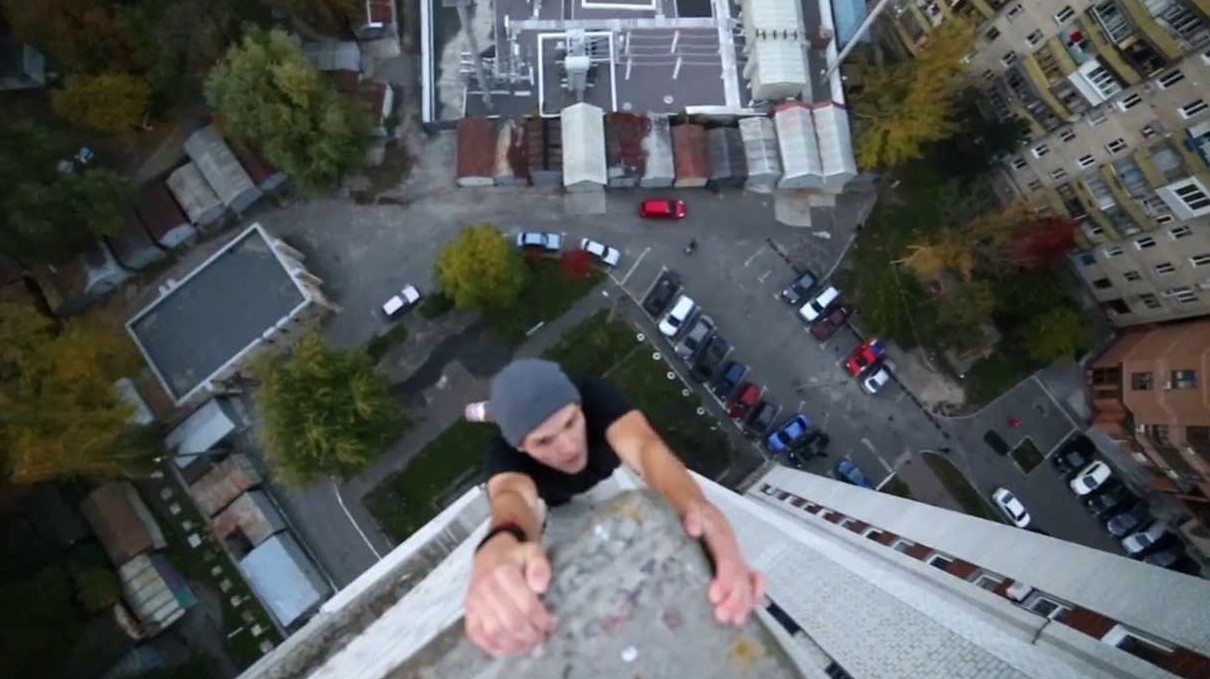 Some people never stop pushing the epinephrine and we all call them the DAREDEVILS, these daredevils lost their lives while attempting some insane stunts. In this article, you’ll be looking at the most unbelievable stunts that people showed the courage to try things that not many people would even dare to try. Here are a few scary selfies of stunts that went horribly gone wrong.

What’s Wrong With This Guy?

Wu Yongning was a 26-year-old daredevil who performed stunts on rooftops, like REALLY REALLY high rooftops, with no safety equipment. At the time of his death, he shared nearly 300 videos of the stunts, so it’s not like, he was inexperienced at what he was doing. The one that ended yongning’s life was performed at the top of a 62-story skyscraper in China. There is a video on the internet that recorded the tragedy, yongning can be seen performing a pull-up stunt and then struggling to climb back up to safety.

A Swing To Death

According to The Daily Mail, a man named Kyle Lee Stocking attempted to duplicate a fear he saw on YouTube in March 2013. If it had gone as planned, the Kyle Lee would have swung beneath the 110-foot Corona Arch in Utah, after jumping off the top. But Kyle Lee misjudged the length of the rope was using, and instead of swinging he smacked the ground, and the impact killed him.

Russian base jumper Valery Rozov was trying to conquer the “Seven Summits” hoping to jump from the highest peaks in each of the seven continents while wearing a wingsuit. According to the IBT, Rovoz had already jumped from the Ulvetanna in the Antarctic and in 2009 had even leaped into an active volcano.

In another tragic jumping misfortune, well-known climber Dean Potter and his friend Graham Hunt died in Yosemite National Park when they hopped from Taft Point wearing wing-suits and smashed into a rocky ridgeline.

A Dive to Death

Free diving is the diving version of free climbing, it’s more or less without equipment, and it’s about a million times more dangerous than the version that’s done with equipment. According to ABC News, roughly 2% of the free diving population dies every year: 100 death per 5000 divers.

If you’re a fan of stunts then you may know or heard of evil Knievel, they now call him the greatest daredevil to ever live and if you know of him then you know that Robbie Maddison is said to be the modern-day incarnation of evil knievel. Maddison is a daredevil to the max, he does things, no one has done or will ever do again.

Senya was a young woman from Saint-Petersburg who wanted to take a picture on the highest bridge in her city, the views from there are amazing and the girl had the great idea of going up there to the highest point bridge for her selfie. However, when she got up there she lost her balance and fell down. Fortunately, she did not die from the fall, what saved her was a high voltage cable that she clung to while she was falling down.

Another one of the most dangerous photographs is the one taken by Rinaldo Danza. Although it’s not a selfie, the story is very surprising, this Filipino councilman was celebrating New Year’s Eve in 2011 with his family at one point in the night, and he took a photograph of his family without realizing that just then his killer was about to kill him.

The Devil’s Pool is located at Victoria’s Falls, It’s an outdoor pool that is located just before the start of the waterfalls. There are many tourists who jump into this pool to take dangerous selfies and there are also many tourists who have died in these waters. In fact, there have been 15 deaths caused by the force of water pushing them off the edge.

In the story of Matt’s Kodiak family, this family was originally from Poland but decided to move and live in Portugal. The father of the family was a photographer and his goal was to find surprising panoramic views in order to get unique images. He was always looking for the best photo and therefore, he decided to take a photo with his wife on a fence and protected cliff in Cabo-Da-Roca. Unfortunately, that day the wind was blowing very strong and they both ended up losing their grip. They both fell down off the cliff under the stunned gaze of their two children who were waiting for them to finish taking the selfie.

Lava is awesome from a distance but wild conventional wisdom advised most people to run from the fiery molten rock. Extreme selfie artists head directly to the heat. In August 2014, the Toronto-based storm chaser Goerge Coronas snapped this selfie in front of an active volcano clad in a futuristic-looking suit, he couldn’t resist taking a photo of himself to a backdrop of the active Benbow Volcano on Ambrym Islands in Fanaa.

You must be thinking that this photo is fake, well Hell Not or it’s not a scene from a movie. This is a professional diver standing on the edge of Dean’s Blue (black) Hole in the Bahamas. This stunt requires the insane talent of any free diver as it bottoms out at 663 feet.

The selfie trend has gone too far, some people do crazy things just to get likes on their posts. We have mentioned some of the crazy stunts and people went too far just for a snap. Selfies can be scary sometimes. From people taking selfies on top of the tallest buildings in the world to people taking selfies next to volcanoes- here we have covered most of the Scary Selfies that have gone way too far.

No comments to show.